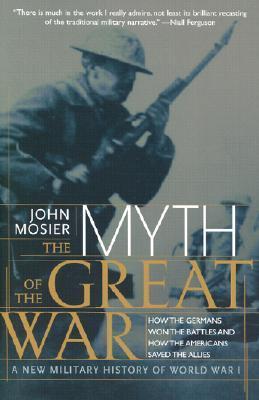 The Myth of the Great War: A New Military History of the First World War

Based on previously unused French and German sources, Myth of the Great War is the first English language account of the unknown but important war between the French and the Germans on the Western Front, showing how close the Allies came to absolute defeat there, and the extent to which their attempts to create new theaters of war in Italy and the Balkans backfired.

"A compelling and novel reassessment of World War I military history; historians who disagree will be compelled at the very least to come to terms with his arguments."

"The author knows his military history, strategy, and tactics... packed with evidence, much of it ingeniously obtained and argued."

"Students of military history love to argue, and John Mosier gives them much to argue about. From armaments and tactics to strategy and politics, he challenges conventional wisdom and forces a rethinking of the war that inaugurated the modern era."

--H. W. Brands, author of The First American and TR: The Last Romantic

"There is much in the work I really admire, not least its brilliant recasting of the traditional military narrative."