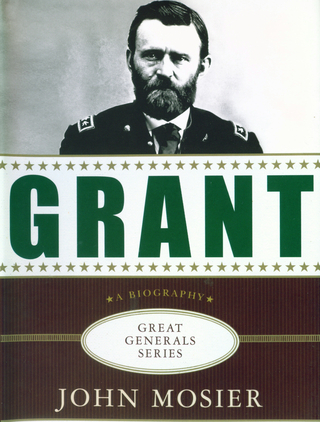 (Palgrave, 2006)
Mosier argues that Grant was not simply the best of the Civil War generals, but agrees with Robert E. Lee's assessment that he was one of the best generals ever to take the field at the had of an army.

"I have carefully searched the military records of both ancient and modern history, and have never found Grant's superior as a general," wrote Robert E. Lee. This statement is, in essence, the argument of John Mosier's Grant: A Biography,an outstanding contribution to General Wesley Clark's Great Generals Series. Indeed, Mr. Mosier's brief for Grant might be called a thesis biography, one that counters other biographies ranking Grant lower as a general, using criteria Mr. Mosier deems suspect.

John Mosier has written the best appraisal of Ulysses S. Grant's generalship ever to appear. Synthesizing and occasionally rebutting the estimates made by various experts—military historians, biographers, and prominent military men, including the praise given to Grant by Robert E. Lee—Mosier has gone farther than anyone in proclaiming Grant to have been a military genius, one who in a number of ways surpassed both Napoleon and Wellington. This is a bold thesis, but Mosier is fully persuasive on point after point, smoothly and effectively placing Grant into perspective not only in terms of the Civil War and American military history, tradition, and doctrine, but also in favorable comparison with the greatest European generals of the past three centuries.


A solid description of the most effective Union general. Grant has been consistently underestimated and Mosier helps correct that.
Newt Gingrich.